This is perhaps one of few rare times where I don’t know how to begin: the upcoming movie I’m So Excited has left me in a dilemma.

There used to be a time when us animals were given a bad name, by our own species of-course, when we slept around without ethics or moral, or fuc%$$d around pretty much anything that moved.

And I am not saying that the blame and stigma was incorrect. We deserved it; simply by our actions.

But the human society has changed, and I wouldn’t really say evolved. They are slowly but surely going back to the uncivilized stone age. I mean, c’mon, look at the Miley Cyrus girl at those music awards, MTV was it?.

She was supposed to be a role model for young girls, but with all her twerking and everything, she has changed the definition of a role-model!

Which brings us to the movie I’m So Excited.

The official synopsis by Transmission Films is as follows:

Legendary Spanish director Pedro Almodóvar (All About My Mother, Volver, Talk To Her) is back with a kitsch, camp and outrageously funny comedy set mostly on a plane!

The film stars many of Almodóvar’s greatest Spanish character actors including Javier Cámara (Talk to Her) Cecilia Roth (All About My Mother), Lola Dueñas (Volver), Blanca Suárez (The Skin I Live In) and features special appearances from Penélope Cruz, Antonio Banderas and Paz Vega.

I’m So Excited as far as the story goes, is brilliant. Director and writer Pedro Almodóvar delivers a nicely crafted and intelligent movie, which not only makes the audience laugh, but also sends across a subtle social message of letting bygones be bygones. Here it fares.

Then comes the soundtrack, and the acting. Both are spot on, and do justice to I’m So Excited.

The movie also has a high dose of comic scenes, propelled by hilarious situations that would often leave you in splits.

You may now ask if everything is great about I’m So Excited, then why the sensitive build-up to review?

Well, there is a reason for it. And it ain’t pretty.

Look, as humans, we are pretty much free to behave as we want. We can wear what we like, say what we like, and do what or whom we like. It should be a free society, with marriage-equality and equal rights for gay/lesbian people being just.

BUT. The buck has to stop somewhere, and I’m So Excited is almost borderline offensive, simply by the fact that it not only mocks the gay and lesbian, but shows most humans as animals! 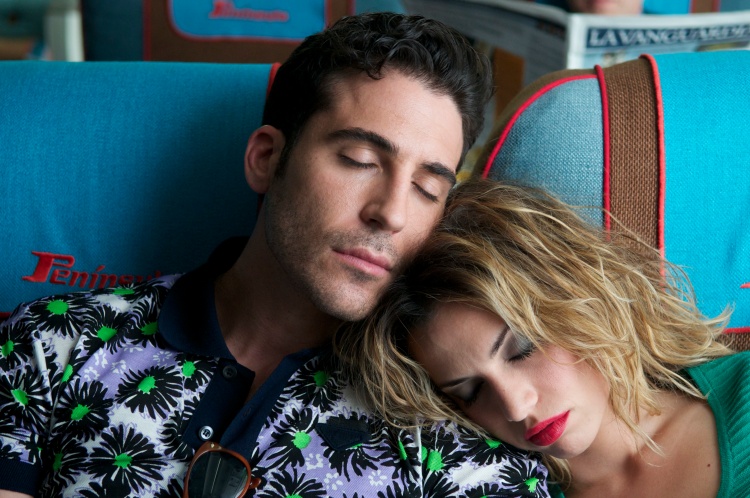 Now there is no harm is depicting sex and escapades on screen, but surely a line should to be drawn when a gay steward walks out of the cockpit [ironical name for the cabin!] with semen on the tip of his lips, which is then wiped off by another steward and licked off!

If you can ignore the debauchery, then watch I’m So Excited. It’s hilarious, but the humor may not appeal to everyone.

I’m So Excited releases in Australian Cinemas on 19 September, 2013.